Home Press Releases ‘THE DEVILS BETWEEN US’ OPENS DEC. 3 AT KU THEATRE

‘THE DEVILS BETWEEN US’ OPENS DEC. 3 AT KU THEATRE 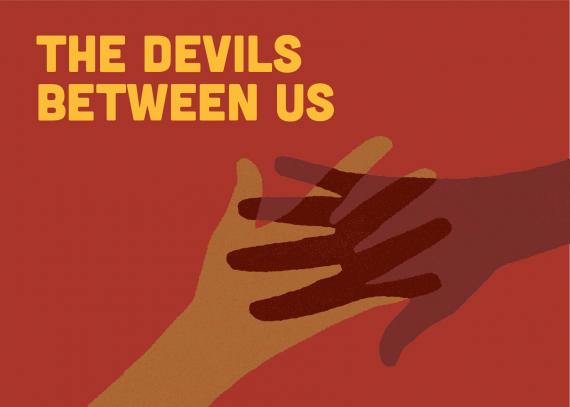 “In ‘Devils,’ Latifa walks into the play not as someone unfinished or irreparably damaged by her past. Instead, when she returns to her hometown, she seems to have been the only one who has done the work to grow, change and begin to love who she is,” said Cara Hinh, the director. “Something great that Sharifa Yasmin, the playwright, has done in this script is that she has shown how the people who have the most privilege, who have societal positioning and leverage like George, a white cis middle-class man, can make the decision to instead trap themselves into a world where they can’t express or be who they want in order to maintain the status quo of patriarchal power.”

Some of the highlights around KU’s production of “The Devils Between Us”:

The play might just alter the way audiences perceive transgender community members, individuals who practice Islam, or both. Anger and regret are portrayed in the work, but there is also a sense of hope and fulfillment, Hinh said. Yasmin’s writing takes audiences into rural South Carolina where a trans Muslim woman, Latifa, returns to her hometown for her estranged father’s funeral and reunites with her teenage lover, George.

All post-show panels will be held in the Inge Theatre. Dates and topics are subject to change.

Tickets for “The Devils Between Us” are available for purchase by calling 785-864-3982, visiting the University Theatre Ticket Office in Murphy Hall, or online through kutheatre.com.

The play includes sexual themes and descriptions of violence against the LGBTQ+ community. For more information about the content of the play, please the KU Theatre website.

Hinh is a queer, fat and mixed Vietnamese American director and educator originally from Indiana. As the child of a refugee, they are drawn to work about and for people of the diaspora that expands the ideas of American identity. Hinh rejoices in work that speaks to the complicated and messy intersectionalities of holding a multiplicity of cultures and identities. Hinh is a 2021-22 Drama League Hangar Fellow and a proud member of the Roundabout Directors Group. For more, visit carahinh.com.

Walker (she/her) is an actor, musician and performance artist based in Chicago and represented by Paonessa Talent. Chicago stage credits include Madge in “Picnic” (American Theatre Company), Gavriella in “Mosquitoes” (Steep Theatre), “Cinderella at the Theatre of Potatoes,” “Dracula” (the Hypocrites), “The Addams Family” (Mercury Theater), and three summers as a featured artist with “The Fly Honey Show” (the Inconvenience). Her film and TV work include “Work in Progress” (Showtime), “Soundtrack” (Netflix), “Alex/October,” “Kappa Force” and “Two in the Bush.” She is a member of SAG-AFTRA.

In addition to Walker, “The Devils Between Us” cast consists of Chris Pendry, a Lawrence senior, as George; Isabella Lind, a Solvang, California, junior, as Barb; and Jordan Ray, a Topeka sophomore, as Hunter. The creative team is rounded out by KU students Cassandra Ludlum, a Topeka third-year student, as costume designer; McKenzie Needham, an Andover senior, as lighting designer; Marzieh Ashrafian, a doctoral student, as dramaturg; and India MacDonald, a Topeka junior, as the stage manager. In addition to Cook, a professional freelance intimacy choreographer, the production also features Dave Wanner, scene shop manager in the Department of Theatre & Dance, as scenic designer; and Kayleigh Shaffer, a recent alumna and freelance lighting and sound technician, as sound designer.

The Department of Theatre & Dance is one of three departments in the School of the Arts. As part of the KU College of Liberal Arts & Sciences, the School of the Arts offers fresh possibilities for collaboration between the arts and the humanities, sciences, social sciences, international and interdisciplinary studies. To learn more about the Department, visit theatredance.ku.edu.

KCAT presents ‘Shop around the corner’