Kansas City, MO – Nationally-recognized Coterie Theatre’s 2017/2018 season of plays selected by Producing Artistic Director Jeff Church aims to deliver engagement for family members of any age. One of the national leaders in producing theatre for youth and family audiences, The Coterie also enriches curriculum for schools looking for excellence in arts education. This coming season, The Coterie will have several productions where young theatre-goers will interact and participate during the performances.

According to Church, “Family audiences as well as educators and their students will find much to embrace in this season. We’re continuing our civil rights conversation with We Shall Not Be Moved: The Student Sit-Ins of 1960, and have two magical dramas, Tuck Everlasting and the world premiere of Imaginary Friends: Legend of Sinnissippi Park.  For fun, we have A Charlie Brown Christmas and Jack and the Bean Mágico! And summer of 2018 will be blockbuster, with Goosebumps the Musical: Phantom of the Auditorium playing at The Coterie, and Disney’s Newsies in co-production with, and playing at, the White Theatre at The J.”

Opening the season will be an inspiring drama for middle school ages and older “that continues the civil rights conversation we’ve encouraged over the past several seasons,” Church explains, referring to a series of plays that brought to life on stage the true stories of Rosa Parks, escaped slave Anthony Burns, and the Little Rock Nine. “The importance of the 1960 Walgreens sit-ins to the civil rights movement will be front and center in We Shall Not Be Moved: The Student Sit-Ins of 1960,” an interactive drama that features a post-show forum during which the audience will interact with the actors in character. “It’s the perfect way for young people to not only be introduced to historical events, but actually feel as though they get to know the characters and their stories along the way.” In conjunction with the production, The Coterie will again offer in-school workshops lead by professional teaching artists who help students put the play into both historical and contemporary context.

For middle and high school students, The Coterie and UMKC Theatre will continue their long history of co-productions with the world premiere of Imaginary Friends: Legend of Sinnissippi Park. “We’re excited to debut this new drama adapted from a short story by popular fantasy author, Terry Brooks, who wrote ‘The Shanara Chronicles.’ In Imaginary Friends, Brooks sends a sick teen on a hero’s journey that leads from the park next to his house to a new understanding of strength and courage.”

For upper elementary and middle school ages, The Coterie continues its tradition of bringing classic literature to life on stage. Church says, “We have the dramatic play, Tuck Everlasting, which brings all the magic of Natalie Babbitt’s popular novel to life on stage, contemplating the benefits and burdens of never growing older.”

The Coterie’s season also includes several plays and musicals for all ages. Church explains, “Families have a chance to see the new stage adaptation of the wildly popular Goosebumps series, now turned into a fun, cartoony mystery called, Goosebumps the Musical: Phantom of the Auditorium. We also haveJack and the Bean Mágico!, an interesting new bi-lingual adaptation of the “Jack and the Beanstalk” fairy tale that highlights the environmental aspects of the story in a fun and interactive way – by encouraging the children in the audience to become bugs and crawl through the dirt. For families over the holidays, we’ll have the return engagement of A Charlie Brown Christmas, which will feature a live jazz trio on stage. And as a special engagement in Summer 2018, The Coterie and the White Theatre at The J join forces for the very first time to create Kansas City’s first locally-produced production of the Broadway smash hit, Disney’s Newsies.“

As extensive as it is, however, The Coterie’s performance schedule is only one small part of the company and its impact on the Kansas City community. “From training young actors and writers to using theatre as educational and community outreach, we have a strong commitment to expanding the theatre experience beyond our stage door,” Church says. “The Coterie Acts, our theatre school, offers advanced actor training for ages pre-kindergarten up to 18 years old. Our classes are offered year-round at multiple locations around Kansas City and include an extensive summer program of classes and performance camps.”

“We will also be working with schools and heading into classrooms again this year, too – dozens of them across the metro, in fact,” Church explains about The Coterie’s numerous efforts out in the local community. “In addition to our transportation subsidy program that assists educators at schools where transportation costs may preclude them from attending a production, The Coterie will also continue offering in-classroom, curriculum-based workshops; our Dramatic Health Education Project: STDs/HIV, the free, award-winning touring presentation that educates teens about STD prevention; and Reaching the Write Minds, our teen playwriting program that helps give voice to emerging young writers. Additionally, we’ll also once again serve as host to Project Pride, a performance collective of local teen LGBTQ artists and their allies. We’re excited to continue and grow all these programs that help make theatre and The Coterie accessible to as many young people as possible.” 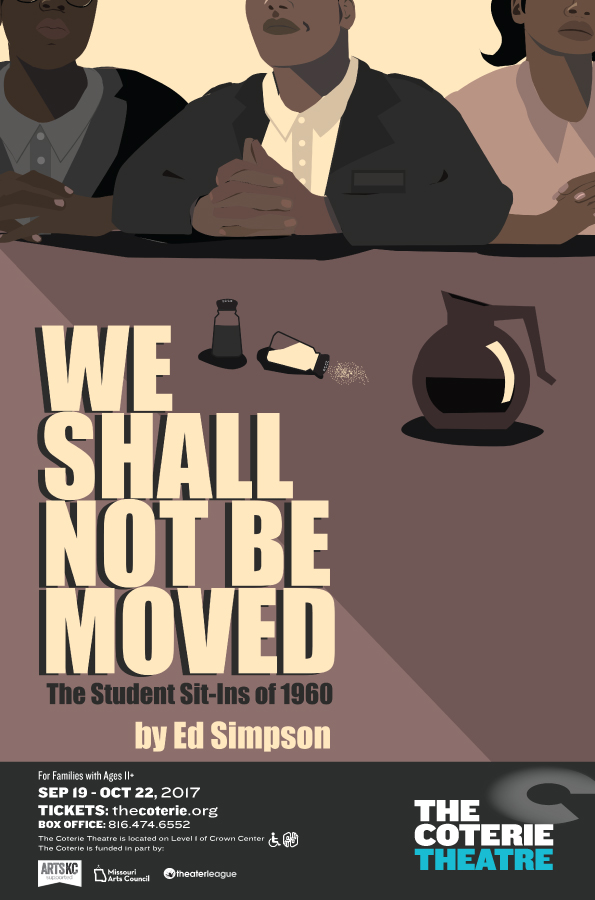 We Shall Not Be Moved:
The Student Sit-Ins of 1960

By simply taking a seat at a whites-only lunch counter, four freshmen from A&T College in North Carolina launched a youth-led movement seeking equal service for African Americans. Their non-violent demonstration in Greensboro gained such momentum that it quickly inspired a new generation to stand up for their Civil Rights. This is the story of ordinary citizens who witnessed a movement forming right before their eyes.
For families with AGES 11+  |  Approximate running time:  75 minutes 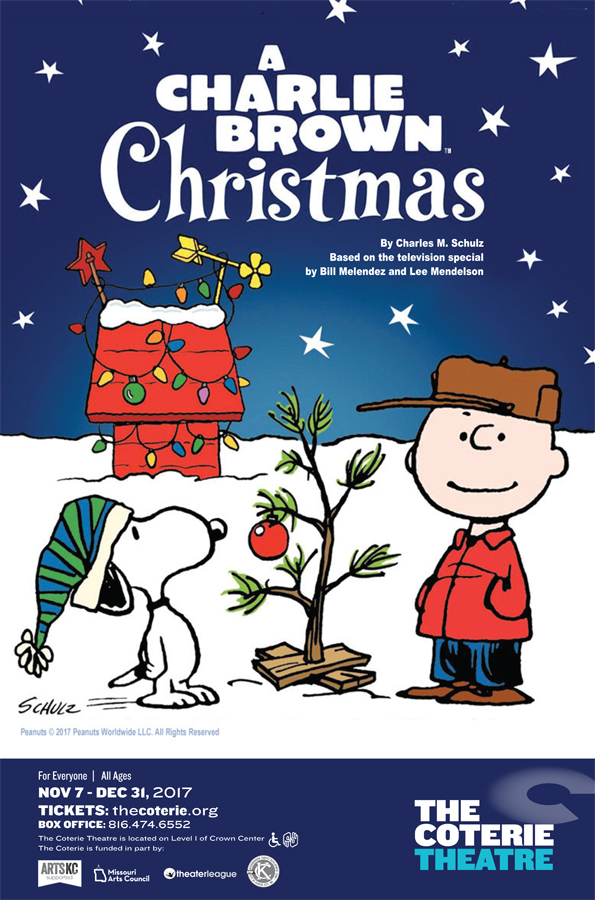 The animated classic comes to life on stage – with a live jazz trio playing the original Vince Guaraldi arrangements! In their letters to Santa, everyone seems way too materialistic, so Charlie Brown tries to restore the holiday spirit by directing the school Christmas pageant. But after ending up with only a ragged little fir tree, Charlie Brown turns to his best friend, Linus, to learn the season’s real meaning.
For ALL AGES  |  Approximate running time:  55 minutes
Peanuts © 2015 Peanuts Worldwide LLC. All Rights Reserved 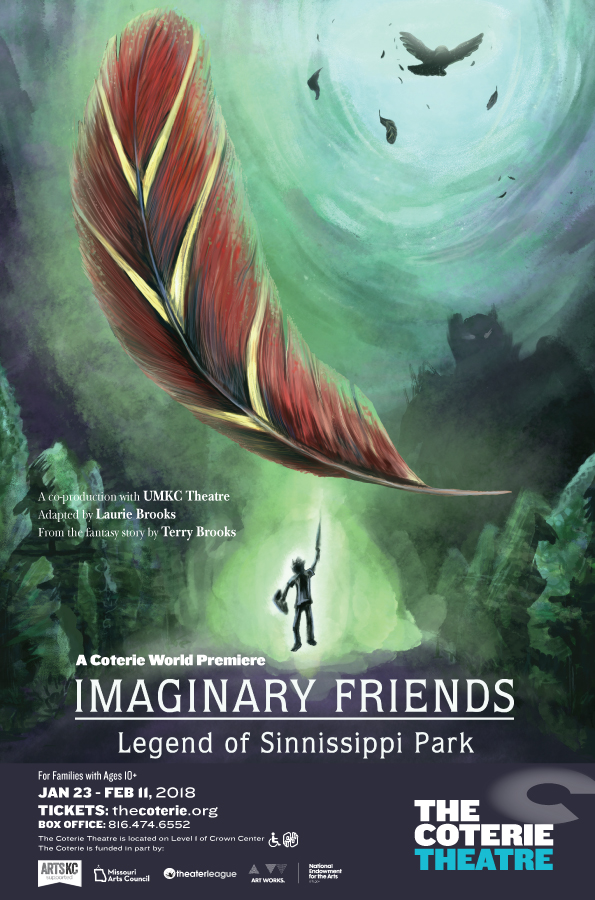 A hero’s journey filled with magic and wonderment, the story begins as 13-year-old Jack McCall learns some very bad news about his health. As the seriousness of the news sets in, reality begins blending with fantasy and Jack is drawn back to the magical park and imaginary friends of his childhood. He soon finds himself, along with an elf, an owl, a troll, and a ghost, on an adventure to save the park from an evil imprisoned in a massive tree. But when Jack begins to question whether the adventure is real or imagined, he quickly learns how facing this adversary may be the key to facing his illness.
For families with AGES 11+  |  Approximate running time:  70 minutes 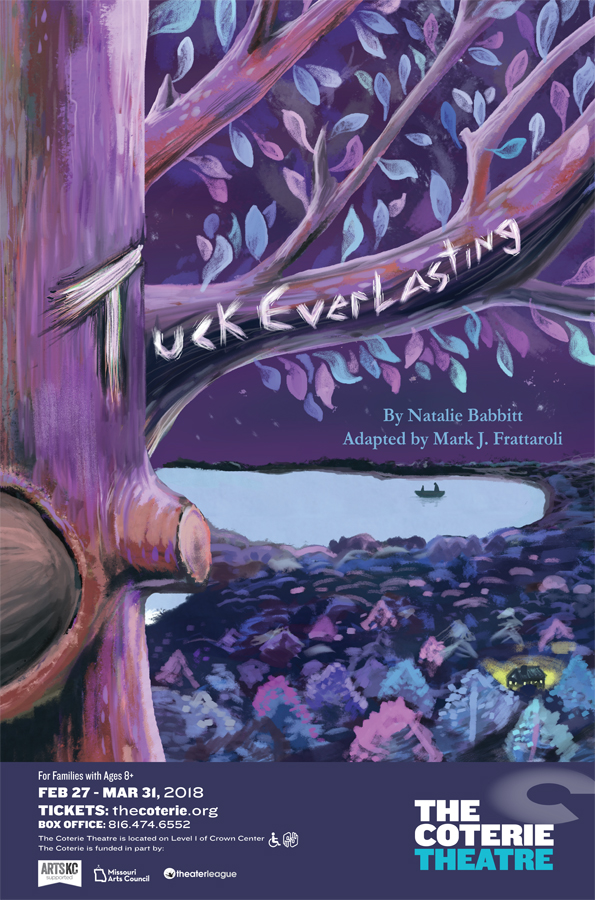 Over a century ago, the Tucks – Ma, Pa, and their sons Miles and Jesse – drank from a forest spring and no one in the family has aged a bit since. They’ve had to live separately to avoid suspicion as to why they never age, seeing each other only when they reunite every ten years. Now, young Winnie Foster is out exploring the woods, and accidentally discovers the Tuck family secret… leading her to the question: Is living outside the rules of time a blessing or a curse?
For families with AGES 9+  |  Approximate running time:  65 minutes 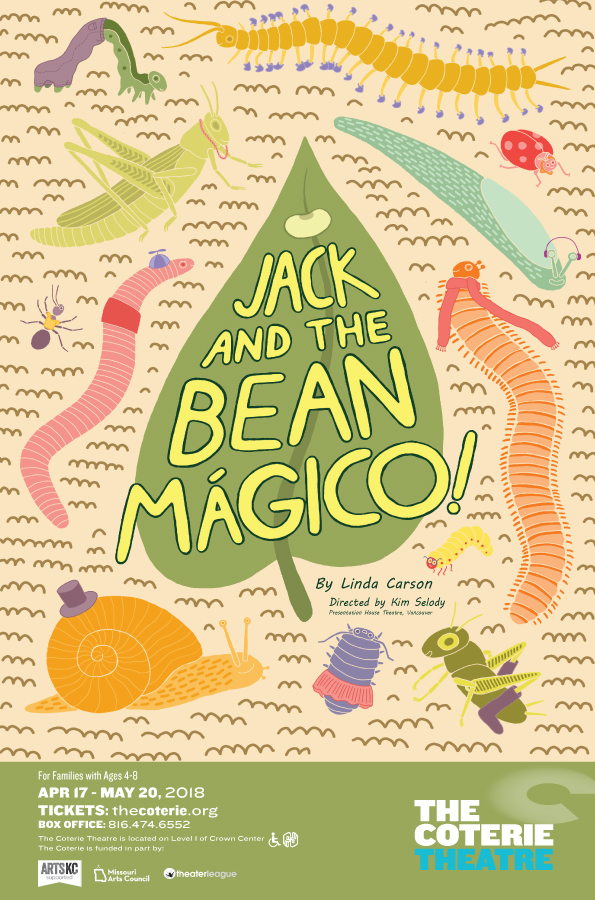 Jack and the Bean Mágico!

This delightful production is both bi-lingual and interactive! The classic fairytale, “Jack and the Beanstalk,” is told with the audience’s help, who assist Jack as he climbs the beanstalk and emerges on the giant’s land. In the giant’s rich and fertile garden – where young audiences become tiny bugs to help keep the soil healthy – Jack uncovers the source of troubles with his own farmland and learns how to make it fertile again by understanding and balancing the life cycle.
For families with AGES 4-8  |  Approximate running time:  60 minutes 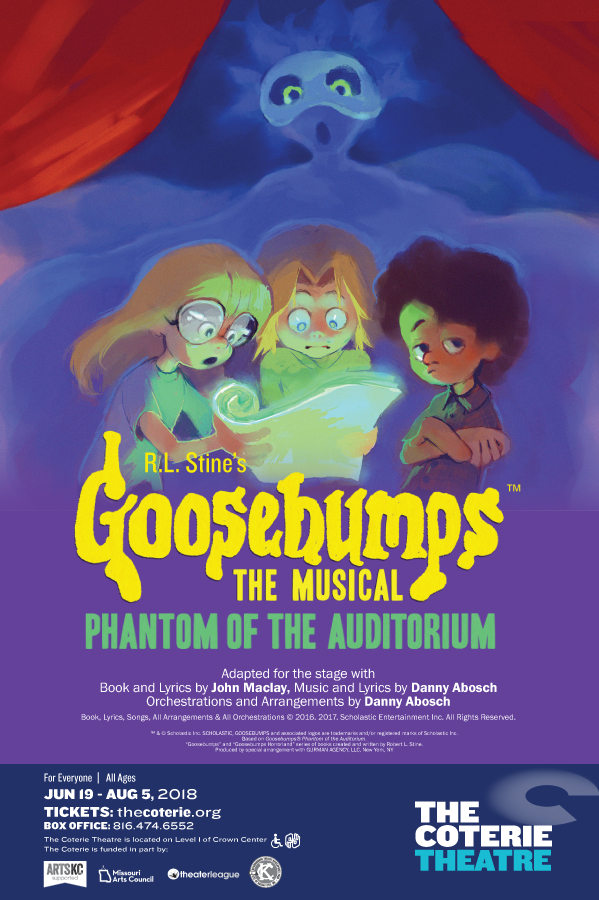 R.L. Stine’s
Goosebumps the Musical:
Phantom of the Auditorium

A cartoony musical based on the beloved series from R.L. Stine. (Not too scary for the little ones.) Brooke and Zeke have been cast as the leads in the school’s new production of an old play about a phantom. Mysterious things start interrupting rehearsals and they have to wonder: is this someone’s idea of a joke or is the Phantom real? A musical adventure ensues that will bring out your inner sleuth and keep everyone in suspense until the final curtain.
For ALL AGES  |  Approximate running time:  60 minutes
™ & © Scholastic Inc. SCHOLASTIC, GOOSEBUMPS and associated logos are trademarks and/or registered marks of Scholastic Inc. Based on Goosebumps® Phantom of the Auditorium. “Goosebumps” and “Goosebumps Horrorland” series of books created and written by Robert L. Stine. Book, Lyrics, Songs, All Arrangements, and All Orchestrations ©2016. 2017 Scholastic Entertainment Inc. All Rights Reserved. 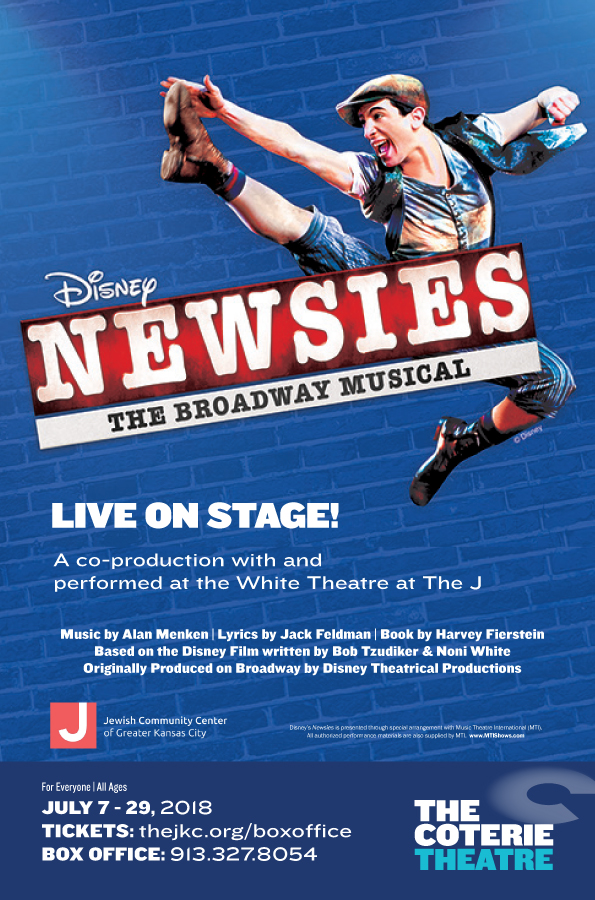 For the very first time, The Coterie and the White Theatre at The J join forces to create Kansas City’s first locally-produced production of the Broadway smash hit. Set in New York City at the turn of the century,Newsies tells the rousing tale of Jack Kelly, a charismatic newsboy and leader of a ragged band of teenaged ‘newsies,’ who dreams only of a better life far from the hardship of the streets. But when publishing titans Joseph Pulitzer and William Randolph Hearst raise distribution prices at the newsboys’ expense, Jack finds a cause to fight for and rallies newsies from across the city to strike for what’s right.
Disney’s Newsies is presented through special arrangement with Music Theatre International (MTI). All authorized performance materials are also supplied by MTI. MTIShows.com.

Tickets, Spotlight Passes, and Group Reservations for The Coterie’s mainstage season are available now by calling The Coterie’s box office at 816.474.6552 or visiting www.thecoterie.org.

Subscriptions: In lieu of season subscriptions, The Coterie offers the Spotlight Pass, which works like season tickets without committing to a set schedule. Spotlight Pass holders pay $100.00 for a flexible pass that includes 10 tickets – a savings of 40% off individual ticket prices – that can be used for any show or combination of shows in the 2017/2018 Season.

Group Pricing: The Coterie offers groups of 20 or more a special preview rate of $5.00 per person the first week of each production (A Charlie Brown Christmas excluded). After preview week, groups pay only $5.50 – $6.50 per person depending on performance date. Group prices for the musical productions, A Charlie Brown Christmas and Goosebumps the Musical: Phantom of the Auditorium, are $6.00-$9.00 per person depending on performance date.